Cwmystradllyn – water water everywhere & some slate and a view 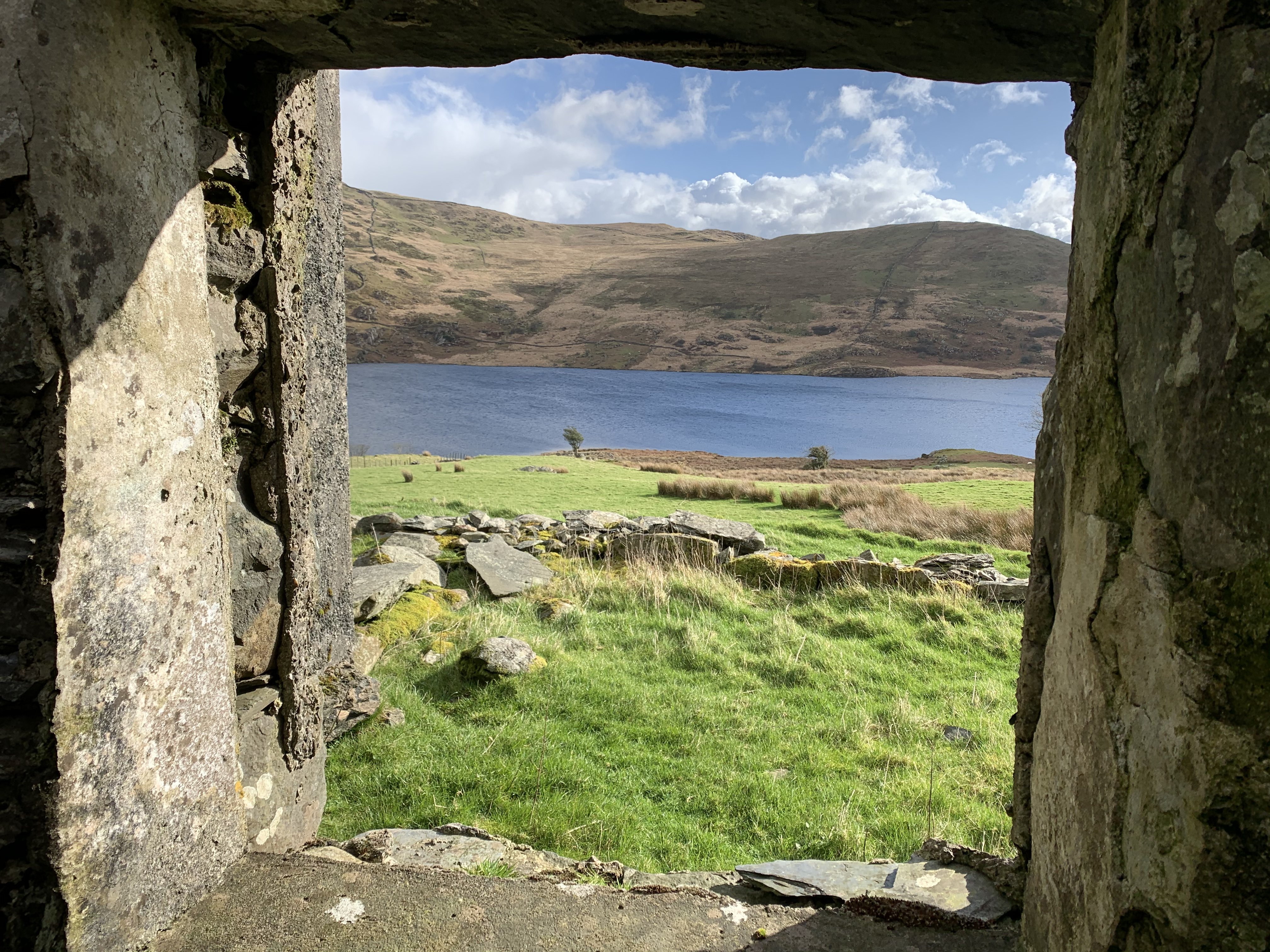 As I am sat here typing this our esteemed first minister of Wales has just announced that we will be in full lockdown for at least the next 3 weeks, bang goes that inclination to go exploring once more …….  but I have plenty of past rambles to keep me going, luckily I have made notes and taken plenty of photos.

It was promising a lovely  Sunday so myself , Els and the dogs Nel and Sali all loaded up into the pick up for our latest adventure , little did we know it would be one of Sali’s final jaunts.

Destination was Cwmystradllyn, the old disused village of Treforus and the magnificent slate workings of Gorseddau. 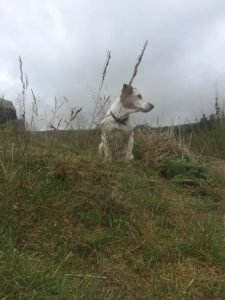 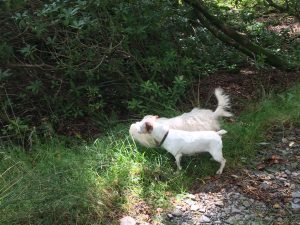 To get to Cwmystradllyn you head up towards Garndolbenmaen from Porthmadog. It is a lovely valley with a lovely lake well known locally as its the main water reservoir feeding most of Llŷn and Eifionydd. The lake itself belongs to Welsh Water and is also a very popular fishing venue, the gin clear waters hold wild brown trout as well as stocked rainbow trout. The valley itself if flanked by the harsh, dramatic mountains known as Moel Hebog and Moel Ddu, both reaching well over 100 mtrs towards the skies, to be calling the environment harsh is certainly an understatement.

The lake itself is a natural lake being fed by the surrounding mountains and peat bogs, even during the hottest of summers the level does not drop much. It has been extended in 1959 when the original dam was constructed then further altered both in 1976 and 1981. It covers in total 40 hectares and holds 3 million cubic meters of water.

As you drive up the traditionally welsh narrow lanes, dodging the walkers and making room for oncoming cars, you will see an old derelict building on the right hand side, first time it really does take your breath away. Akin to an old  gothic medieval abbey out of the set of  ‘game of thrones’, it is actually an old slate mill, yes the original designer went a bit over the top with his designs but same could was said for many of the slate mine developments.  Ynys y Pandy slate mill was a huge white elephant and was open barley 10 years. I shall not go on as I have a separate in depth blog planned for the history or the mill…… watch this space. 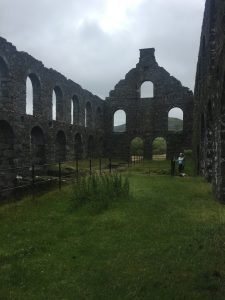 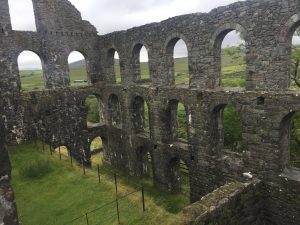 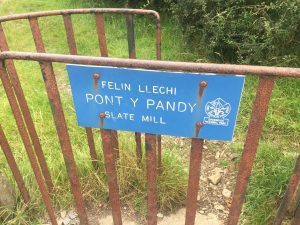 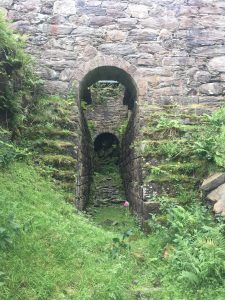 We arrived at the small car park, sometimes parking can be quite tight, a mix of fishermen’s cars, a elderly  couple with the back door open and enjoying a coffee whilst admiring the view, and a camper van – enjoying Wales’s free hospitality. We pop out and walk back up the road for about 200 yard and then turn right around the back of the old farmhouse on to a track.  Luckily for us fair weather explorers the path up to Gorseddau quarry is on the old quarry tramway,  after quarrying the slate it was pulled all the way to Ynys y Pandy Slate mill , fair old distance. Cwmystradllyn is a wet old place hence why there is a natural lake, water is constantly pouring off the peaty desolate hills, even in the height of summer so I was very grateful that I had my scarpa boots on and not my lighter summer shoes, you need them. Dogs of course were loving all the water and mud, what is it about dogs and mud, bit like cheese and wine, one thing is for certain, they won’t be in Mrs J’s good books. 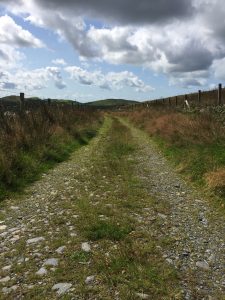 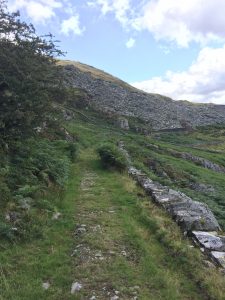 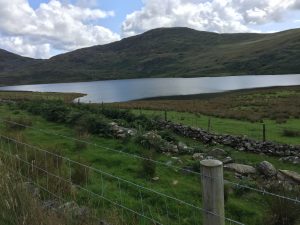 As we push along you eye is drawn towards the once fantastic farm buildings, now ruins, how have they been left to attain this fall from grace. Known as Tal Y Llyn,  close your eyes and you can imagine a family all dressed in traditional rags with the children outside running around and pigs and animals penned in the various  buildings, it must have been a busy old place all those years ago, still a fine if not sad sight today. 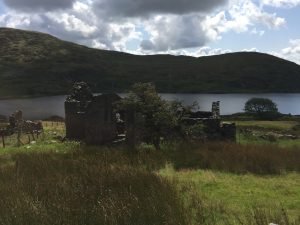 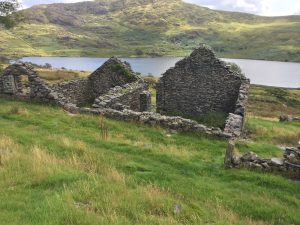 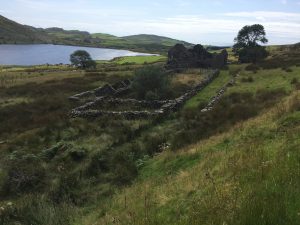 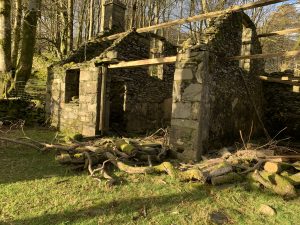 We arrive at a fork in the track, straight ahead takes you through a rather strange oasis in the middle of the desert you could  say. A piece of mature woodland in the middle of this bleak, inhospitable valley, once inside the shelter of the canopy  it is quite pleasant, again remnants of an old coach house and further in something that resembles the foundation of an old building. Again known as Plas Llyn which translates to Lake mansion or Lake country house. I presume this was the managers house built alongside the quarry development, would make sense as everything else involved was on a very grand scale. It’s so pleasant within this speck of greenery  that it takes a while to escape its warmth and carry on the road to Gorseddau. After admiring the bleak landscape and various slate embankments and bridges we finally arrive at the quarry only to be welcomed by what must be one of my very favourite bits of slate engineering, the famous overhanging wall. No one really knows why this was built with such an overhang, maybee for strength, maybee for shelter for the trams, maybee to stop sheep climbing up, one thing is certain and that is its amazing construction, pictures really  do not do it justice. Maybee for the o so grand designer it was just a folly, and he is up there today looking down at us mere mortals debating his wall whilst  he is laughing graciously at us. 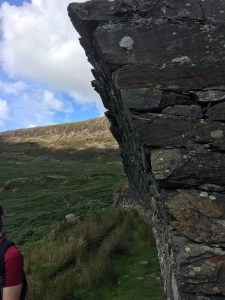 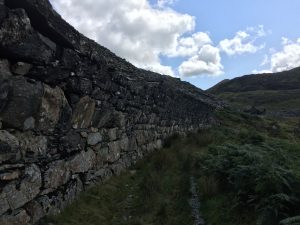 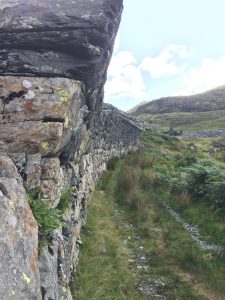 Gorseddau was based on the Penrhyn principle of quarrying, stepped galleries and incline access with plenty of infrastructure  thrown in such as blast shelters, inclines, and the famous wall. Although quarried from 1859 – 1871 it never made a single penny in profit. During its better years in  1860    1800 tonnes was processed but during its final days  in 1871 only 23 tonnes was removed. The quality of the slate was quite poor and only suitable for floors, urinals, and fencing thus not attracting much money. 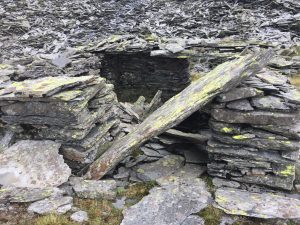 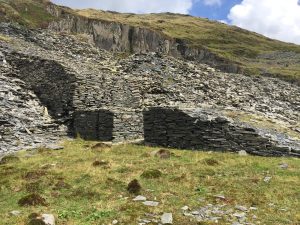 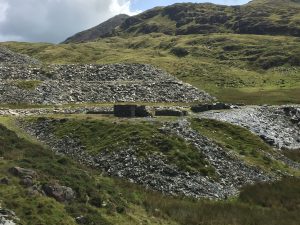 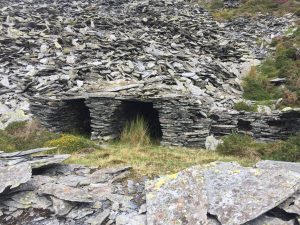 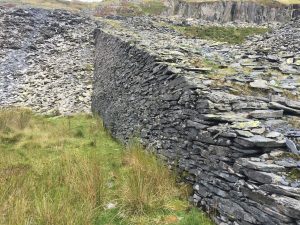 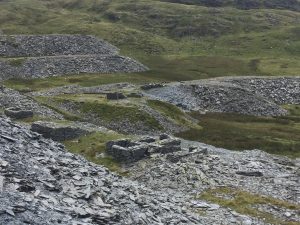 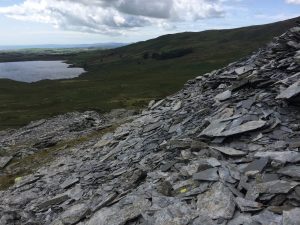 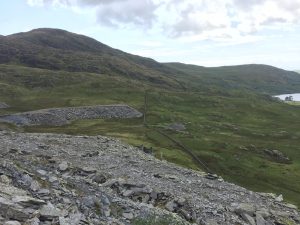 After a well earned cup of tea, sandwich and some exploring we decided that we should head back on the return journey, this time via the top path and visiting the abandoned village or Treforys. After a few hundred yards we took a path up towards the right which brings you a few hundred meters up the hill side. Here you can see the remains of Treforys, a village build for the expansion of the slate quarry that never was.  By 1831 thirty six houses were laid out in 3  streets , each with its own 1/4 acre of best quality welsh peaty farmland, not that they grow much in this inhospitable environment, a pig or two maybee. By 1861 the whole village was totally abandoned. you can still see its ruins, a very sad place in my mind. Once through you rejoin the path and the tramway and follow your nose back to the car park. 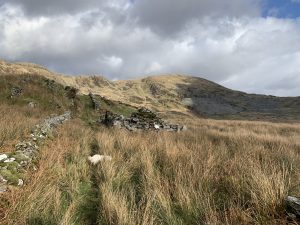 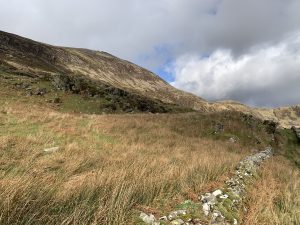 A good morning had by all