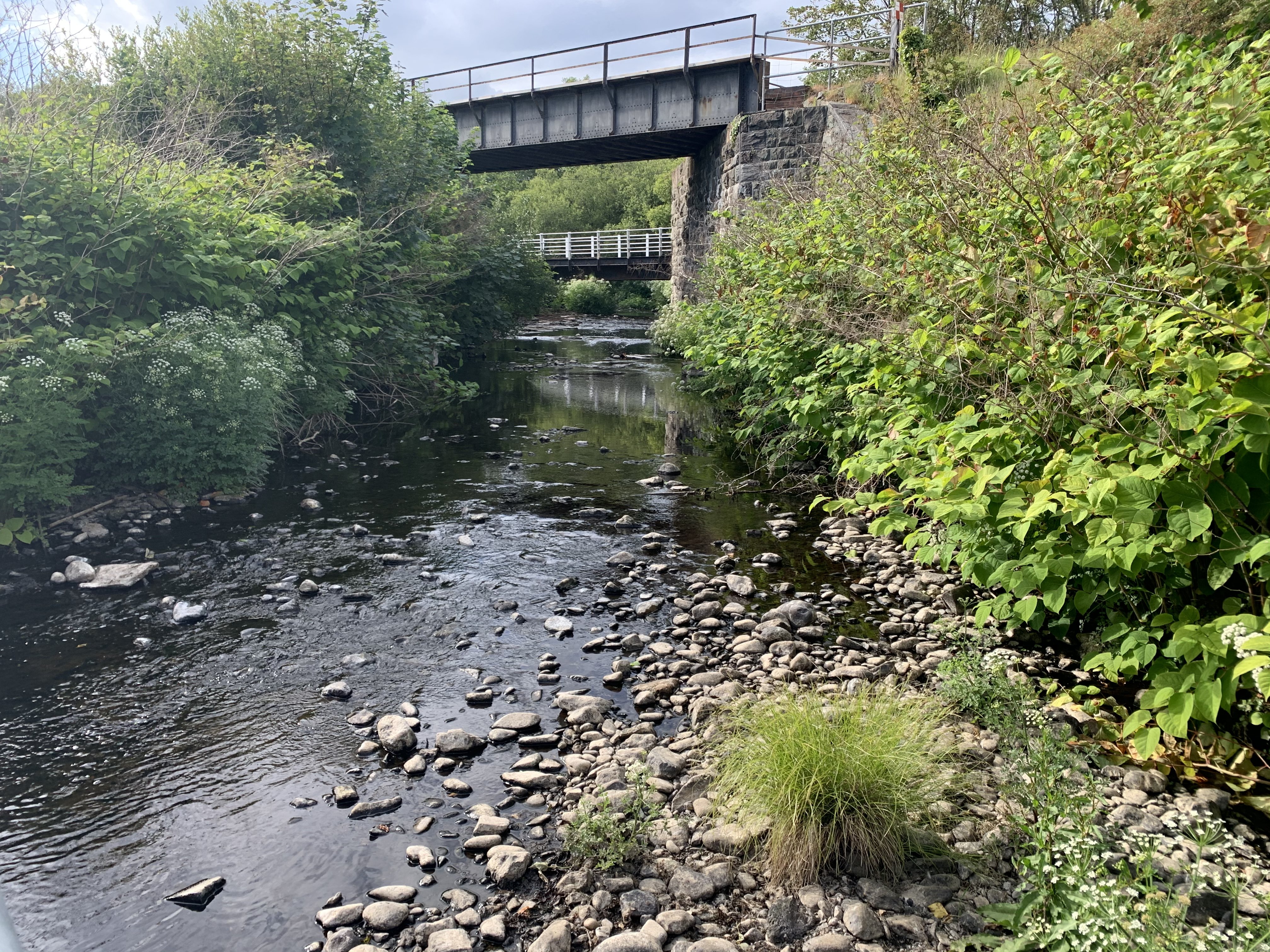 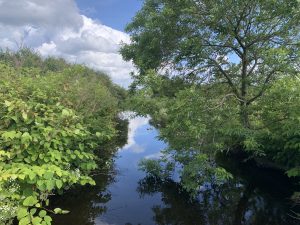 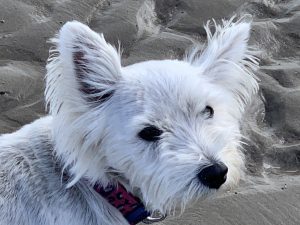 Beeching did some damage I tell you …….   The Axe fell  on Afonwen Station, closed on the 7th December 1964 as part of the country wide massacre………

This is the start of today’s lovely walk  – Traeth Afonwen

Afonwen  translates to  ‘white river’ I have no idea of its origins, and is the name of the small stream which works its way down from Chwilog to the beach, the whole area is commonly known as Afonwen. When you mention this name chances are that you will have heard  of it for two reasons:-

1 – You must have seen these big blue lorries around the country delivering and collecting towels and bedding , yes Afonwen Laundry , a local company which was bought out a few years ago by Brookes laundry but now are using the ‘Afonwen’ brand all over the UK once more. I wonder if someone in London is thinking ‘what on earth does that name mean?’ whilst watching this huge lorry passing by with tonnes of clean sheets and bedding on it. They still have a depot at Afonwen.

2- The famous station  which was closed in ’64 during the decimation of the UK rail network by Mr Beeching , and who’s title is in the Welsh classic song  ‘Ar y Tren i Afonwen’ by Bryn Fon , a well celebrated Welsh music artist.

You will find yourself driving down a small narrow lane and at the end you will see a lovely big railway bridge, finding a place to park can be tricky but local knowledge helps.  Afonwen is a tiny stream running down the road and ends up as nothing really on the beach but a wide wet trickle of water over the sands, once you  go under the magnificent railway bridge you will see a small, steel footbridge on the left, we crossed and followed the very narrow footpath which brings you out on the beach.  Here you will see a step up to the left on to the sea wall defenses, this gave us a much better view of the sea and of the old Afonwen Island station ahead. 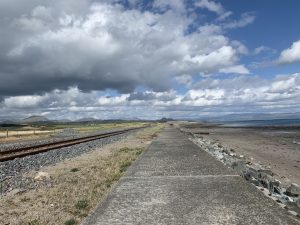 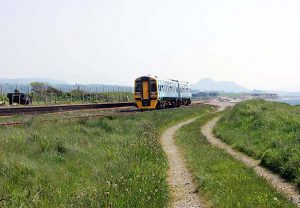 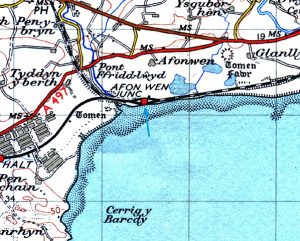 Nothing much exists of it except  in your imagination to try and work it  all out . You will see a small collection of houses and some static caravans on the left again , the last house is the renovated station master’s house,  everything else was stripped bare and flattened.

On July 29th The Caernarvonshire Railway Company was granted permission to build a railway between Caernarfon and Afonwen , was completed and opened in 2nd September 1867, it had 3 platforms and was a junction station which the Pwllheli – Dovey railway ran through.  It became a very busy station with up to 15 services a day passing through and up to 10 arriving and departing on the Caernarfon line but like many other successful services the axe did fall, and fall heavily.

Here are some Archive photos … 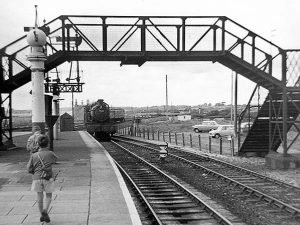 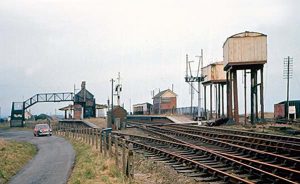 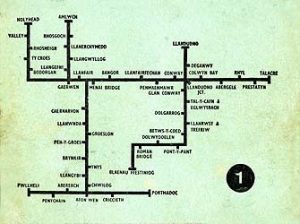 As we carried on walking a solitary train came past us on the Pwllheli line, 3 passengers on it, shows you the strange times we are in , we waved and Crazy Nel started barking , I do believe the train came off better on that score. about 100 yards ahead the railway line leaves the sea wall and goes inland somewhat so this was our cue to find our way down to beach and Nel’s freedom off the lead, a grown man climbing down some very high boulders with a small Westie in his arms is certainly tricky at the best of times and a rather strange sight to see, thank the lord there was no one else there – phew.

Onward we went , Nel with the freedom to run and chase flies as if there was no tomorrow. Today is  a special day in the lunar calendar, full moon, new start tomorrow.  For this reason we are on big tides and we were there at pretty much low water, it always amazes me the size of some of the boulders, rocks and reefs popping up out of the sea’s tranquil face, akin to a hungry shark waiting for its pray to come happily sailing bye, you really need to know these waters to sail or fish in them. 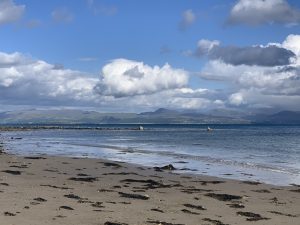 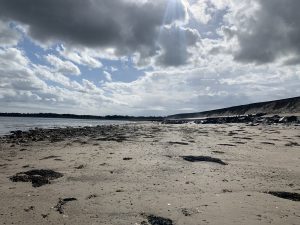 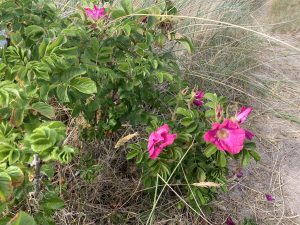 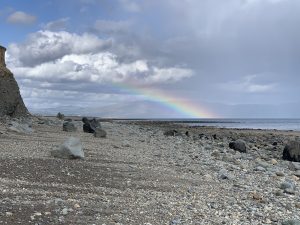 One thing that never fails to amaze me is the amount of erosion that is constant here on the south of the Llŷn.  As you can see from the photos , a good 20-30′ high bank exposing thousands of years history from its cross section, a geologist dream I’m certain, no hard gabbro round here only shale, sand, and more shale, does show how fragile an landscape we exist in and we really do need to start respecting it for what it is, mother earth, if we don’t then it will sort itself out I’m sure and we are not part of her plan. 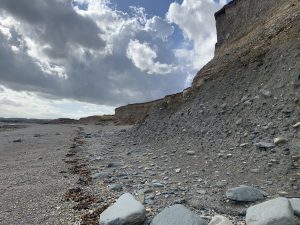 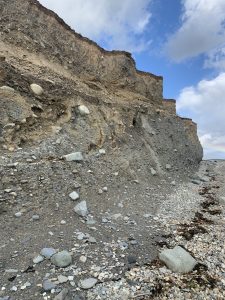 That’s what happens when you have a sit down with a flask of coffee and the usual banana, contemplating life, earth, where do we fit in, do we fit in, one thing is certain we need to be more responsible my friends.  Nel enjoyed her 1/4 banana & coffee, any one else with a crazy Nel who likes coffee.

Time to turn back round and head back on the return leg of the journey, Nel running free to her hearts content, me cursing the soft sand in places. 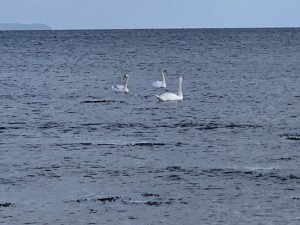 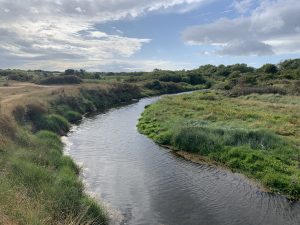 Afonwen is a truly lovely quiet walk ….  well worth it .