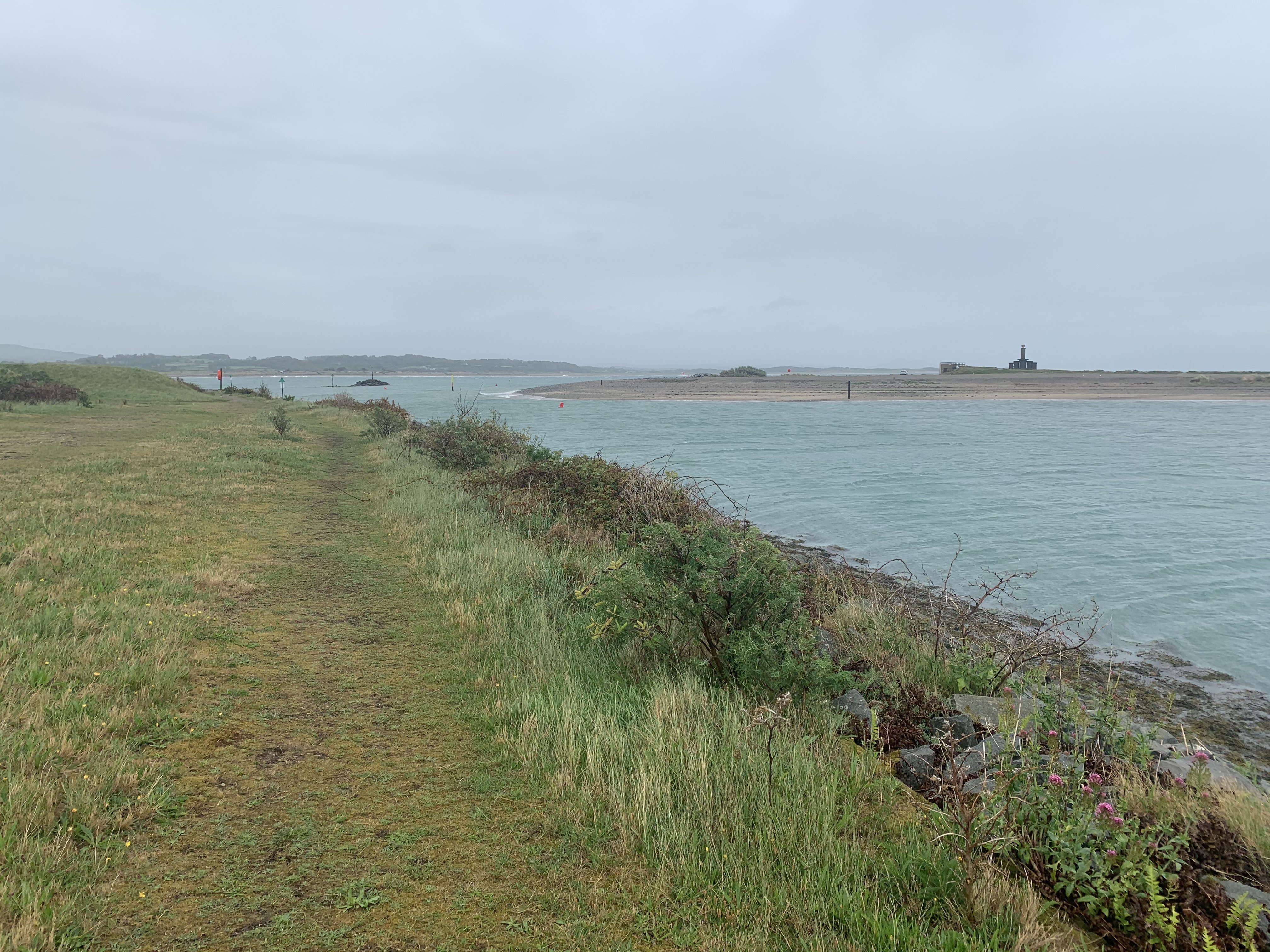 Three  days ago we were praying for some rain and a break from the relentless heat experienced over the past week, as they say ‘be careful what you wish for’ and could not have been truer . The rain came Friday evening , all day Saturday and all day Sunday.

Luckily for me I have been building some new bookshelves in my study,  well it was get rid of some books or build bookshelves – no contest. This had kept me busy along with the usual office stuff of paperwork, marketing ect, but by Sunday afternoon cabin fever was starting to set in, I had to escape from this place, fresh air, even the crazy one followed me everywhere with  the look in her eyes of – please can we go out. Having waited for a break in the weather, and to no avail, 4 o clock arrived and I looked at Nell and it was time to escape – rain or no rain. 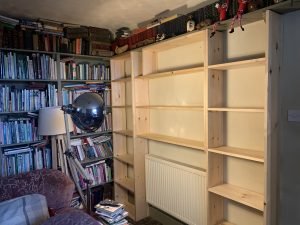 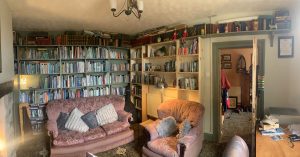 Rucksack packed, coffee made, we made our way to the pickup, getting rather wet between here and the car, well here we go, its going to be a wet one I mumbled under my breath. We hit the road and as we were coming down in to Pwllheli we could see the drab grey clouds parting ahead to show a lovely brightening  shade of blue, we might be in luck I thought to myself. As we pulled in to the car park it was positively dry and dare I say , the sun was ever trying its very best to show its beautiful face, downside being, everyone else will be thinking the same.

We were going to head out along the beach at Glan Y Don in Pwllheli, we have always known it as ‘lan mor berch’ from Childhood days. There has been a lot of development here over the past 30 years , some say for the better some say for the worse. Thirty years ago we had a muddy, silted up harbour with swing moorings and a few trot moorings, remnants from times past when Pwllheli  harbour used to be big player in the shipping and shipbuilding world, disappeared many years ago by now. 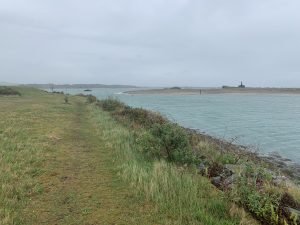 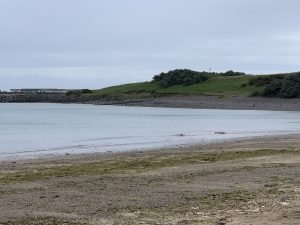 A large portion of the inner harbour was dredged along with a new channel as well as the required sea defenses built, a new 450 birth marina built along with the relevant maritime shops, new boat yards. It really has put Pwllheli on the map and excelled it to being one of the finest boating areas in Wales and North West. A long way from the paths I used to walk as a youngster with my grandfather, at that time is used to be a party developed estuary and caravan park.

In any case we were walking from  glan y Don all the way to Abererch , past the awesome Abererch Sands Holiday Center and then back on the road to Pwllheli, past the marina and back to the pickup , bout 4 miles in total. It is a lovely walk, today particularly quiet as I think our timing was perfection itself. As we were trundling through soft sand we could see the occasional dog and owner exploding on to the beach behind us. The beach is a mix of very soft lovely sand which flows down to a very hard Plato of compacted very fine mud &  sand. The tide was quite high so walking was on not the easiest task in the world especially as it has a 30 degree angle as it does ramp down sharply to the flat stuff , walking akin to someone with a harsh limp, and muscles twice as big on one leg than another. It had been blowing a bit during the day so the waves were breaking smoothly on the shore, mother nature signing one of her unique melodies once again. As it was so quiet I let Nell off to run freely and to be fair she only disappeared twice, once after a seagull and the other after a Rabbit, she returned quite quickly after some wise words from myself, her training is coming along well I must say, and I didn’t spend two hours trying to find her. Once you get to Abererch sands you just head along the road keeping left all the way until you arrive back at Pwllheli and the marina , pleasant enough journey with some nice views of the afon erch along the way. 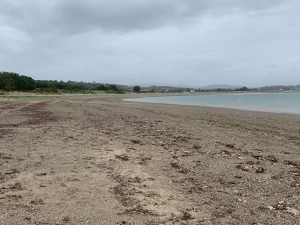 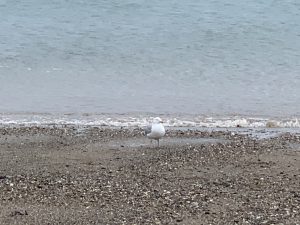 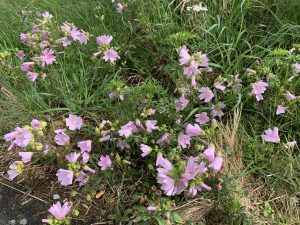 Strangely enough I should have been at Abererch sands this weekend, It was supposed the weekend of the superb pen Llyn Ultra which was yet another casualty of  Covid 19. A tremendous weekend of running , over 200 people running either a 50,75 0r 100 mile coastal ultra marathon, getting to be a must do event for all these crazy ultra athletes. And before you ask , no I am not a runner and if you saw me in the flesh you’d understand what I mean. Quite sad to walk through there and seeing the place as it would be in bleak midwinter. I did not ponder and onward we went.

As you walk out along the beach and back again we came across the new Pwllheli Lifeboat station currently being built. This will be a state of the art brand new facility which will see Pwllheli coming in to the 21st century and and being able to launch a new ‘Shannon Class’ boat quicker, faster  and  straight in to the sea. 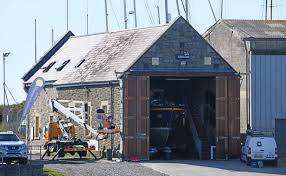 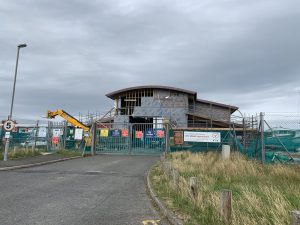 There has been a station at Pwllheli since 1891 at Tocyn Brwyn , at the outer harbour at then a cost of £480.  Pwllheli has always had very strong inks with the sea and the RNLI. We headed back in to the car after a very well needed walk and off home we went .

I will leave you with this list of past lifeboats .

”We launched the boat in the tempest, though

death was the goal in view,

And never a one but doubted if the 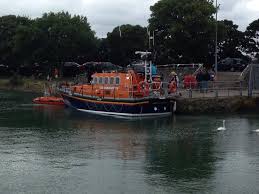